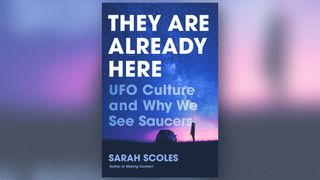 “They Are Already Here” by Sarah Scoles.

Do you remember reading a New York Times story in 2017 that claimed to unveil a Pentagon program dedicated to investigating UFOs? Did you hear rumors about why the FBI closed a solar observatory the next year for then-undisclosed reasons? Are you confused about why there seem to be so many documentaries about alien sightings?

After reading that New York Times story, Scoles was suspicious and wanted to figure out what was really going on with the Pentagon program. She didn’t solve that mystery, but she did end up writing a book about contemporary UFO culture. This interview has been edited for length and clarity.

Space.com: When did you know that this was going to be a book?

Sarah Scoles: I wrote two articles for Wired … but then after those were done and published, I was still on my computer late at night trying to figure out what was going on with why UFOs were so popular right now and what was going on with this Pentagon program. I didn’t think that all of that research really had a place in an article or that an article could be long enough to encompass it. And so I talked to my editor, and I said, “Books are generally a bad idea. Should I do this one?” She said, “You know, if it’s something you’re going to be Googling late at night no matter what, you might as well write something about it.” That was kind of the moment where I was like, “I guess I just am down this rabbit hole and can’t stop so I might as well share what I find with other people.”

Space.com: Talk about the importance of traveling to reporting for this project. Where did you visit that most influenced your thinking about UFO culture?

Scoles: I realized at some point that I, on my own, was not going to solve whatever the mystery of UFO sightings or this investigation program was and I would have to take a different tactic, which was understanding the people and the kind of culture surrounding it. Especially since I’m a freelancer, I had more freedom to go places and do things. And I thought that it would be the best way to do justice to that community, to go and actually experience the places and events that they take part in. And so, for most of the chapters, I think I ended up going somewhere. And so the on-the-ground reporting was important to me.

One of my favorite places is this small tourist attraction in Colorado called the UFO Watchtower, which gets its own chapter in the book and was a place I had been before just because I live here and I go on lots of road trips. But I hadn’t never tried to understand it as a cultural phenomenon. It’s this weird, small attraction in the middle of nowhere. And once I went there with a reporting mindset, rather than just a tourist mindset, it was cool to see it as kind of a community gathering place and where people with lots of different opinions on lots of different things can interact with each other in a peaceful way, which I think is kind of lacking in general in society right now.

Another place that was really formative for my thinking about all this was going to the International UFO Congress outside of Phoenix. And it was my first interaction with people who were really into UFOs. And also there, you find skeptics, you find hardcore believers, you find people who believe that there’s a bunch of aliens in the basement talking to politicians all the time, and even people who just think it’s classified military projects. And just seeing that there was this thing that drew all these people with these widely varying opinions and relationships to evidence, a thing that brought them together was informative, I think.

Space.com: You end up writing a lot about information, authority and trust. How did working on the book change the way you think about those topics?

Scoles: I came into it with a pretty traditional science-journalist mindset: Why do people not value scientific expertise, why do they subscribe to conspiracy theories, and why do they think about evidence in illogical ways? — just like fundamentally not understanding that. I think I came away from it having looked at the history of UFOs, and specifically the way the government agencies have dealt with the topic in the past, which is some bad-faith investigation projects and a lot of hiding of documents and proceedings for one reason or another.

I came to understand why it was that people didn’t trust the government on this topic or didn’t trust scientists. And a lot of it was because, in the past, federal agencies and scientists had kind of dismissed the topic, been untruthful about the topic or, in some cases, spread false information, and I think also coming to think of UFOs as a belief system instead of actually a scientific topic helped me understand the ways that other people think about other things like vaccinations or climate change. People don’t interact with it like you would a scientific experiment. And while I don’t think that’s great, I feel like I came away understanding why people think that way.

Space.com: Why did you think it was so important to approach these people on your own terms and to try to understand them?

Scoles: It actually comes from a story that I won’t name that I did kind of early in my science journalism career, where I took this kind of pseudoscience subculture and just ripped it apart and wasn’t very nice to the people who were part of it. I didn’t really like the feeling that I had after publishing that article. I didn’t like the way that people thought that I had entered it in bad faith, which I probably had, and that I had spent 2,000 words making fun of what they believed, which even if it was a thing that I didn’t think was valid, was important to them.

I’ve kind of kept that with me. When you’re not talking about people who have power or money, I guess I didn’t want to punch down is the journalism lingo. And so when I set out to [write this book], it was very important to me not to write a book that was just making fun of people, which I think it would have been easy to do. [I wanted] to actually try to engage with people who thought differently than I did and to understand where they were coming from and not just say that where they were coming from didn’t make sense.Advertisement

As I was choosing people to talk to, sometimes I would encounter people who weren’t powerful or weren’t making money off of people, but who had beliefs or experiences that I didn’t think that I could treat respectfully while maintaining my own credibility. And so in that case, I would just not write about them and instead choose people who I thought I could do journalistic justice to while also not just making fun of what they thought.

Space.com: You talk about two recent moments in particular, the New York Times story on the alleged Pentagon program and the Sunspot investigation. What similarities stood out to you about the two events, and what do you think that tells us about society in the past few years?

Scoles: The biggest thing I took away from the commonalities between those two is the influence that the media has on the way that information becomes public. So after the New York Times story happened, it disclosed this supposed UFO investigation program. And then all of a sudden, there were hundreds of other articles kind of repeating the same thing. Because it was a compelling story, because it gets clicks and because journalists don’t have time to re-report everything that someone else reported, so a lot of times, things just get summarized again and again and again and kind of mutate over time.

I kind of tell the same thing at Sunspot. There was an evacuation of an observatory, the FBI was there, no one knew what was going on. All of a sudden, in the headlines, there was this idea that it was because the observatory found something about aliens, and then also the refutation of that idea. And it just kind of spread, the way that things spread on the internet. And all of a sudden, there’s this whole narrative. I think just the way that information propagates on the internet, because people click them, because people love aliens and UFOs and are interested, whole new stories and myths can kind of pop up out of not a whole lot of information. Although that’s always been true, that’s also what happened at Roswell. So maybe history just repeats itself.

Space.com: Do you think there’s been a surge in interest in UFOs, or does it just feel like it?

Scoles: Honestly, it’s hard to tell exactly, especially once you’re in the bubble of something. The people who I’m paying attention to because I’m reporting on this feel like there’s been an upsurge in information, but they’re part of that community. … I think there is an exaggerated sense of people’s interest in it.

Throughout UFO history, the media coverage of UFOs has been disproportionate to the actual interest in UFOs. But then, when there is media coverage, people do become more interested, and this is kind of this cycle. The polls about belief in UFOs kind of have people holding steady on par with the interest in the ’90s. So maybe the interest is larger than it was in the early 2000s, but it’s not disproportionate to what it has been in the past.Advertisement

Space.com: What do you hope a reader takes away from the book?

Scoles: I think the biggest thing I hope that people come away with, which I think is what I came away with, is a little more empathy for people who believe things that you might think are ridiculous or ill-informed. People are motivated by all kinds of factors in their personal lives or in history or surrounding culture. You can’t just dismiss people’s deeply held beliefs because they don’t agree with yours. …

I think, especially because of belief systems around topics that are scientific or kind of science-adjacent, we see a lot of issues around that now, where scientific topics become belief-centric or conspiracized and politically influenced. Instead of just throwing out what lots and lots of people think, it might be better to engage with it a little bit.

The other thing is, the reporting has made me think a lot about government transparency and accountability and the way that federal agencies treat topics and treat information — which is a lot of hiding of things or not talking about things or giving statements that people can’t interpret. I don’t think that really serves us, the taxpayers, very well.