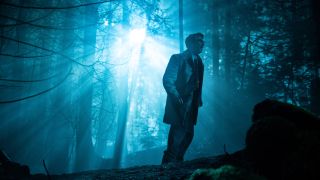 Two locations are legendary among UFO seekers. One is Roswell, New Mexico, where sightings of a so-called flying saucer electrified the town in 1947. The other is Area 51 near Groom Lake, Nevada, where the U.S. government has long maintained a secret base that some say hides UFO-related technology and experiments.

Both of these mysterious and much-discussed sites are front and center in the second season of “Project Blue Book,” the History channel drama based on an actual U.S. Air Force program by the same name, in which teams of experts investigated reports of UFOs from 1952 to 1969.

In the new season, premiering tonight (Jan. 21), Aidan Gillen returns as Dr. J. Allen Hynek, the astrophysicist and professor who served as the real Project Blue Book program’s science advisor decades ago; Hynek is known to many as the “father of UFOlogy.” As Hynek and his colleagues continue their search for the truth about UFOs, they uncover new layers of government deception and cover-ups, set against the backdrop of an intensifying Cold War. At the same time, the show incorporates historic UFO stories that still stir the imagination today, according to the History channel.

While the first season of “Project Blue Book” was an introduction to the strange phenomenon of UFOs, “the second season is about going back to the beginning, to understand where the conspiracy was,” said show co-writer and executive producer Sean Jablonski. To do that, “Project Blue Book” went to Roswell, drawing from eyewitness accounts of people who lived there at the time of the alleged UFO crash and subsequent military cover-up, Jablonski told Live Science.

Though the events at Roswell took place six years before the real Project Blue Book investigation began, the story is so intertwined with America’s UFO lore that the writers felt compelled to include it, said show creator, writer and co-executive producer David O’Leary.

“It’s in many ways the granddaddy of UFO cases,” O’Leary told Live Science.

The so-called Roswell Incident took place in July 1947. Following a thunderstorm, strange debris found northwest of Roswell was swiftly collected by military personnel at Roswell Army Air Field, according to the city’s official website. A press release issued by public information officer Lt. Walter Haut on July 8, 1947, described “a flying saucer” that was now in the Army’s possession.

However, another press release appeared the next day, this one issued by Lt. Gen. Roger Ramey. According to the new report, the recovered object was a weather balloon.

“That was the start of the best known and well-documented UFO cover-up,” according to Roswell’s website. Accounts of a “flying saucer” in Roswell, New Mexico, were later disputed by U.S. Army officials, who claimed the UFO was a weather balloon. (Image credit: Roswell Daily Record)

Other episodes of “Project Blue Book” were inspired by actual locations that boast equally compelling associations with UFOs, such as the mysterious Area 51 and Skinwalker Ranch in Ballard, Utah. Another memorable case highlights multiple UFO encounters that took place not on land, but over the Atlantic Ocean, during a series of NATO maneuvers in September 1952 called Operation Mainbrace, O’Leary said.

At the center of Project Blue Book — in the series and in the Air Force program — was Hynek. He knew very early on that government officials were concealing information about UFOs from the public, “but he stayed with the program, because he was a scientist.” O’Leary explained.

“This was a way for him to gain access to cases, even as he was being complicit in the cover-up itself. So it’s a bit like, ‘How do you expose the greatest cover-up of all time when you’re a part of it?'” said O’Leary.

The real Project Blue Book ended decades ago, but public fascination with UFOs still runs high; in September 2019, more than 1.5 million people RSVP’d to a sketchy-sounding festival in Rachel, Nevada, called “Storm Area 51” (also called “Alien Stock”) with the intent of breaching the perimeter of Area 51 to “see them aliens,” Live Science previously reported. (Only a few thousand people actually showed up, and there was no gate-storming and no aliens in sight, according to Vox.)

Footage from U.S. Navy pilots’ 2004 encounters with UFOs, recently shared online, further fueled speculation about the government’s own experiences with these enigmatic sightings and how many were still being kept under wraps. Indeed, evidence surfaced in 2017 suggesting that the U.S. government had been secretly investigating UFOs since 2007.

Then, on Jan. 13 of this year, a spokesperson from the U.S. Navy’s Office of Naval Intelligence (ONI) confirmed the existence of at least one video and several top-secret documents regarding the 2004 UFO encounter. The spokesperson further noted that submitting these materials to public scrutiny “would cause exceptionally grave damage to the National Security of the United States.”

It would seem that along with a resurgence in public interest in UFOs is a renewed recognition that the government knows more about UFOs than it’s letting on, and is withholding important information, O’Leary said. For that reason, the world of “Project Blue Book” and its UFO cover-ups now seems especially relevant, Jablonski added.

“Project Blue Book, in a way, was the origin of fake news,” Jablonski said. “It was the government’s program to put out stories that say, ‘Whatever you think you saw, you didn’t see.’ This notion of who controls the truth — and the fight over that — is something that probably, above all else, is what resonates today.”